In one of the most awaited games in the Premier League for all the armchair tacticians, Manchester City faced off against Jurgen Klopp’s Liverpool at the Etihad.  A win for Liverpool would’ve marked their dominance against City as it would have been the 4th consecutive victory in the league for them. On a personal note, a win for Klopp would’ve taken his tally from 6 wins in 10 meetings with Pep Guardiola, a record which many can never boast.

City played their previous match just three days before the game when compared to Liverpool’s gap of seven days. For City, Pep made just two changes as Sagna and Kolarov were benched from the previous game. Yaya Toure was brought back to his central role as Fernandinho was pushed to play at right back. Otamendi replaced Kolarov in central defensive position.

Considering that Liverpool had a week’s time before this top 4 clash, many would’ve expected Klopp to play more or less the same squad. And it was not surprising that Klopp stayed with almost the same team as Firmino was the only player to come into the squad and he replaced Origi as the player upfront.

In the first half an hour of the game, City were able to control the game well and evade Liverpool’s well known forward press high up the pitch. City’s control in the game during this particular period was mainly because of two reasons.

1) Clean build-ups from the back due to the link up between Otamendi and de Bruyne, the latter who surprisingly played very deep in most cases.

2) City’s defensive structure was quite compact compared to the previous games.

In certain instances the first half an hour, Caballero often looked to pass the ball to Otamendi rather than Yaya or Stones even if they were free. The pressing of the front three players very high up the pitch meant that the midfield three had to stay behind to maintain the balance in the centre of the field. The main tactic of building out from the back for City was based on the movement of Yaya Toure, Aguero and de Bruyne(in particular). KdB who is known for playing high up the pitch was asked to often drop deep and collect the ball to form the next line of attack. And this happened whenever Otamendi received the ball either from Yaya or Caballero. By deploying KdB deep, City were almost in a 2-4-3-1 shape especially during the first line of progression, with Clichy and Fernandinho in the same line as Yaya and KdB.

In the above instance we can find Yaya in space to receive the ball as he in less pressure compared to Otamendi himself and Clichy’s passing lane was cut off by Mane. Here we can also see the deep position KdB has taken and this allowed Otamendi to play the pass to KdB who took a turn and sent it to Sane. The play was mainly based on Otamendi finding KdB or Yaya(in some instances) and from there on switch the play to either flank and then carry the ball into the attacking third. 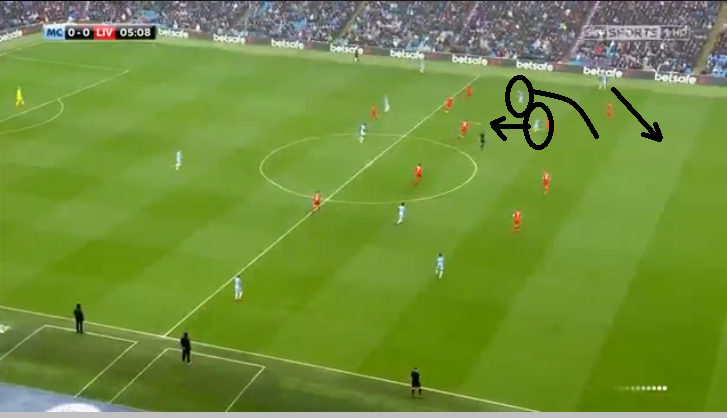 The above two pictures clearly show how Otamendi and coordinating movements with KdB and Aguero could be understood easily. In the above situation, Otamendi has come up higher with the ball and finds space behind KdB. Rather than playing the ball directly to KdB, he finds Aguero. Aguero gently taps it into the space in which KdB could run into. One thing to note here is the movement of Aguero which actually created a free lane for KdB to run into. As Matip had run into the midfield along with Aguero who filled into the space to collect the ball, KdB ran into the space left by Matip and then found Sane in the wing who was adjudged offside. 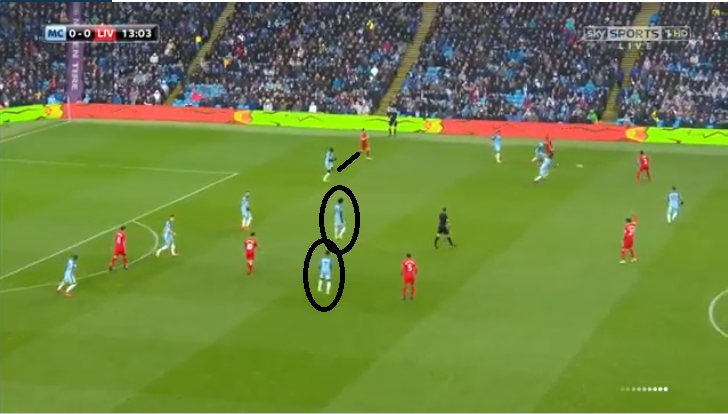 From the above instances, we can identify how compact City are.This might be the result of the defeat against Monaco. Pep knows that at City, he needs to be more patient with this players than he was at Barca or Bayern to implement his favoured positional play system. This was how the first half panned out as both the teams were better in their defensive structures rather than their attacking moves.

The second half of the game saw Liverpool come out with greater intensity and wanting to push City back. With such high intensity play, Liverpool were able to win battle in the centre of the field with Emre Can winning the 1v1s with Yaya Toure. As Yaya Toure seemed very well worn out in the second half, Liverpool were often able to bypass and it needed Pep Guardiola to make a change in personnel to solve the situational problem. In came Sagna for Yaya who slotted into the right back role and Fernandinho occupied his favored place at the centre. An early penalty in the second half gave Liverpool the much needed momentum and saw them counter brilliantly as City put bodies forward to make up for the goal.

The below instance shows how Emre Can was easily able to bypass Yaya Toure. Instead of passing the ball to the feet of Mane, Can decided to dribble past Yaya with the ball and he was successful in doing it as the 33-year old faded with time passing on. This was one of the key factors in Liverpool’s attack down the centre as often Yaya Toure was caught in 2v1 against Lallana and Can. In the 65th minute, Sagna came in for Yaya and City were able to steady the ship.

Battle down the flanks

As the game grew both the teams favoured battling it out in the flanks with Liverpool especially creating 2v1s in their right flank. This often caught out Otamendi who was left to deal with the pace of Mane as well as Firmino who drifted in from the middle. City were able to stop certain attacks through Clichy but with him high up the pitch in attacks, they were caught when Liverpool countered. Liverpool dominated City’s left flank and created most number of chances from it.

As Man City grew into the second half, KdB was deployed to play along side Silva and the duo joined Sane to create an overload in the right flank. In certain instances, Silva and Sterling interchanged roles as Silva dropped wide and Sterling played behind Aguero. City were able to identify the loophole in Liverpool’s left flank guarded by Milner and he was exposed on most occasions. One switch of play caused havoc as KdB’s long ball found Silva who was free on the right flank. And one more moment when Aguero’s goal for City came through KdB from Milner’s flank as well. The below two instances show how City attacked Liverpool’s left flank in the second half and how Liverpool failed to recover balls from important in the same flank throughout the game. 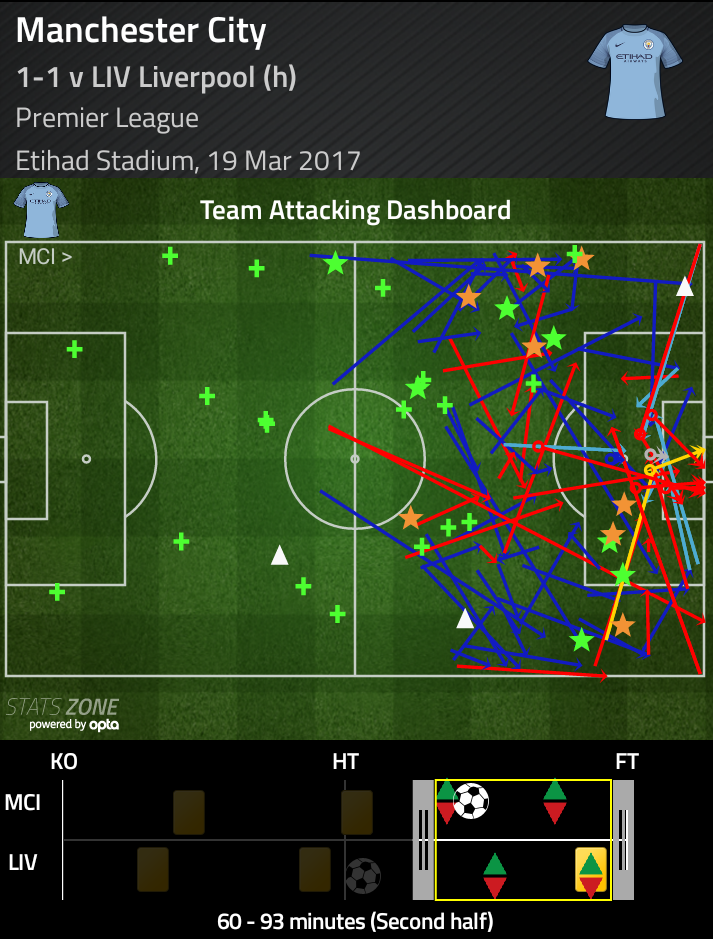 It was one of those days when the game could’ve been won by either side, so a draw seemed a fair result in the end. Both teams would’ve felt that they had missed out on the extra two points. City showed a good deal of defensive respect to Liverpool in the initial half an hour of play and this goes to show how better they can be in the future defensively. The result keeps both the teams in the same place with City and Liverpool at third and fourth place respectively.