The Resurgence of the Deep Lying Playmaker-Part 1

and How Clubs are Using Attacking Midfielders As Solutions A heat map of the man Wesley Sneijder is trying to replace, Paul Scholes, shows how Sneijder would have to adapt his game in order to fill the role required of him
. 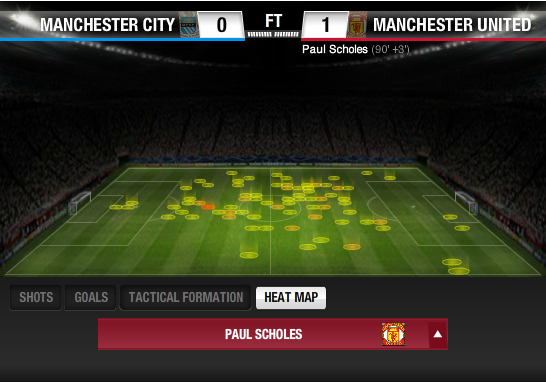 The heat map shows a clear preference to stay behind the half way line in support of the defenders rather than the attackers. For Inter Milan during Mourinho’s days, this role was rotated amongst Esteban Cambiasso and Thiaggo Motta though neither were very adept at passing long range, rather sticking to the role of winning the ball in midfield and laying it off with short and simple passes to Sneijder in attacking positions. Sneijder essentially had two very adept defensive players in behind him thereby reducing the responsibilities on him to support his defenders, he will not be given the same license while at United and would have to learn the trades of defending if he were to be successfully implemented in that position.
It should be added that while United did fail to bring in a new star midfielder, they potentially found one in one of their own, Tom Cleverley. Manchester United were playing like a team possessed in the early part of the season and a primary reason for that was the form of Cleverley who was playing the role of the conductor in midfield, alongside Anderson. While United were free flowing in attack, they were also porous in terms of conceding shots on goal. During the first four games in which Tom Cleverley and Anderson were partnering in midfield, United conceded 7goals in the first four matches, after which Cleverley’s injury has ruled them out for the rest of the season till date. That in effect is the possible danger United are facing if they bring in Wesley Sneijder.
–Hasan Ejaz
Part 2 will up very soon