Last year’s clashes between the two sides were certainly eventful. From the 5-0 thrashing by Barca at the Nou Camp to the 1-0 Copa Del Rey win for Real Madrid, the press and fan focus on the games were huge. The general feeling was one of intensity and as such emotions spilled over on more than one occasion.
The tactical battle however was overlooked at points. From Barcelona’s smooth, fluid performance in the first game, to Madrid’s aggressive pressing in the first half of the Copa Del Rey Final to the somewhat reserved full back play from Barcelona in the first leg of the Champions League semi final, there was some interesting tactical battles.
However this season’s first La Liga clash between the two sides promises to be the most unpredictable yet.
One of the main talking points tactically is what formation Barcelona will set up in. Will it be 4-3-3 or 3-4-3?
It’s quite clear Barcelona have become more unpredictable in terms of shape and line up. Guillem Balague commented on Tuesday’s Revista De La Liga “This is not as we’ve seen for the three previous years with Pep Guardiola. [Before] a 4-3-3, we know who’s going to play… he seems to be adjusting much more than before.” Indeed many different players have played for them this season, especially in attack and a range of shapes have been played.

Barcelona
The rumours seem to lean towards them playing a 3-4-3 shape. This would mean a number of things. In terms of the back three, it could go a number of ways in terms of selection. However there a lot of doubts as to whether Pique will be picked. Abidal will probably start on the left of a back three with Puyol in the middle and Mascherano on the right of it.
The midfield four because of this would probably mean Alves on the right, Xavi and Busquets in the middle and Iniesta on the left. Such a move is risky – it will require a very good level of intensity from Barcelona to keep the ball in such positions because otherwise their defence could be exposed. However as Messi put it on Monday “It means we’ve got more people in midfield and more possession of the ball.”
The front three will also be interesting. Whether Fabregas will start, or whether they will take the same shape as last season with Messi drifting around in deep central right positions with Villa and Pedro holding wide and making diagonal runs into space. There are a whole range of possibilities open to the Catalan side. There is the possibility that Messi will lead the line in the centre with Fabregas slightly deeper than him leaving the right hand side to Alves. However the way this was exposed against Valencia’s strong left side combination of Alba and Mathieu means this will probably not be the case especially considering Real Madrid’s left side of Marcelo and Ronaldo.
Apart from the shape, Barcelona will probably have a similar general attitude to the game – long transitions with the three players at the back spreading out really wide, playing the ball between the lines and controlling the circulation of the ball in midfield. Arguably the main key points will be how aggressive their pressing is – it’s not always as intense as people say it is – and also how quickly they will move the ball around. Whether they can get good penetration against Real Madrid is still questionable despite their 5-0 thrashing of them last year. 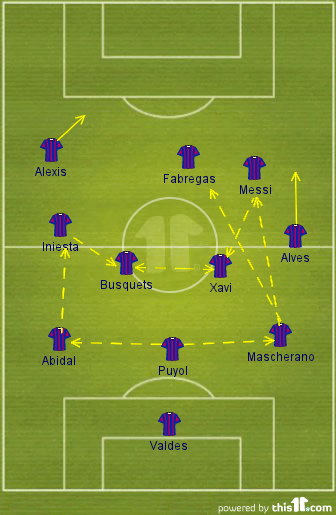 (How Barcelona build possession from defence to midfield)
Real Madrid
Arguably though the biggest talking point should be how Real Madrid will approach the game. The key will be, as it always should be against Barcelona, to remain compact. Whether they press high up or whether they sit back and try and make space tight in the final third, they have to remain together.
Their main shape with Mourinho has been the 4-2-3-1 shape with Alonso and Khedira in the two holding roles and Di Maria, Ozil and Ronaldo as the three behind the striker, generally Higuain. Whether they change their shape will be interesting as well. If they move the ball quickly on transition after winning it, be it high up the pitch or in their own penalty area, there may well be space to exploit, though Barcelona’s defence is arguably better than theirs. As such the two wingers, Di Maria and Ronaldo, will be one of the key attacking areas. Their speed and aggression on the counter attack is brilliant and their penetration is first class, especially in 1v1s.
Whether Ozil will play is probably their biggest selection choice. If they try and win the ball high up, Ozil may well be a key player to take advantage of the space with quick transitions. However if Barcelona go with a 3-4-3, meaning an extra man in midfield as well as their obvious threat between the lines and predictable control of possession, an extra man in midfield could well be essential. Thus Ozil may well be dropped in favour of Lassana Diarra in a 4-3-3 formation. In such a scenario Sami Khedira would probably be the highest midfield player and the key may lie in the way Mourinho used him against Valencia, meaning they have a flexible option of pressing high up and trying to stop Barcelona getting space for their transitions from defence into midfield or sitting back and compacting the play in their own half and defensive third.
Their play will probably be much more vertical than Barcelona’s. Whereas Barca do have a mix, though generally most passes remaining short, their play will almost certainly be more horizontal than Madrid’s mainly because they will probably have long spells of possession in Madrid’s half and continuous vertical play won’t work. Madrid will probably have to have very quick transitions and though their possession play has improved a lot, their quick, direct, vertical play will be their main chance to open Barcelona up and get goals.
It will be a fascinating game to watch tactically and if Barcelona do set up in a 3-4-3 it will be interesting to see how Real Madrid will react. Either way it will hopefully, for the neutral, be a great tactical encounter. And with two of the best tacticians around in charge of the teams, there will certainly be talking points after the game. -Written by Jonny Mullins of Lankyguy Blog
We are previewing El Clasico,with a series of articles all of which you can read here
If you like our blog,then do vote for us here.